The First Bank of the United States was given a 20 year charter. In the first 5 years of operation, the American government borrowed $8.2 million and prices rose by 72%. After the 20 year charter expired the government voted against renewing it and the bank closed its doors on March 31, 1811.

Nathan Mayer Rothschild, son of Mayer Amschel Rothschild head of Europe's most powerful banking family was reported as saying that "the United States would find itself involved in a most disastrous war if the bank's charter were not renewed." Five month's after The First Bank of the United States closed the British declared war on the United States. (The War of 1812) allegedly financed by loans from the Rothschild's.

Four years later The Second Bank of the United States was chartered in 1816 ... the European bankers were back!! Andrew Jackson was an advocate of sound monetary policies as outlined in the U.S. Constitution and opposed the central bank system of issuing currency against debt. So he had an investigation done on the bank and discovered "beyond question that this great and powerful institution had been actively engaged in attempting to influence the elections of public officers by means of its money."

On July 10, 1832 President Jackson veteod Congress' decision to renew the charter of The Second Bank of the United States.He said;
"It is not our own citizens only who are to receive the bounty of our government. More than 8 millions of the stock of this bank are held by foreigners ... is there no danger to our liberty and independence in a bank that in its nature has so little to bind it to our country? Controlling our currency, receiving our public moneys, and holding thousands of our citizens in dependence would be more formidable and dangerous than a military power of the enemy."

In 1835 Jackson paid off the  national debt. He was the first and only president to ever accomplish this!

Speaking about the bankers he said;

"You are a den of vipers, I intend to rout you out, and by the Eternal God I will rout you out! If the people only understood the rank injustice of our money and banking system there would be a revolution before morning." 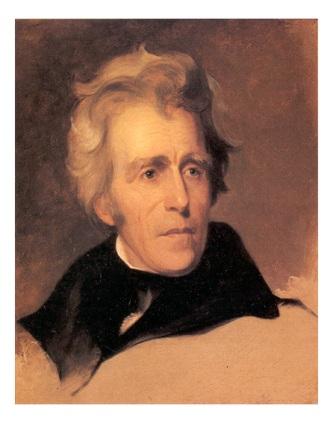